You will have probably seen African Juju hats and people's DIY take on them all over the internet. I had thought about doing one for ages now and when I saw Katrina's guide to a DIY version and where to buy feathers in Australia I decided to order the feathers. 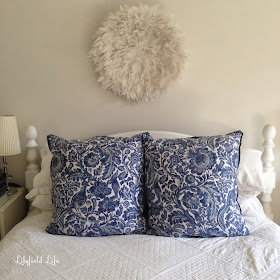 The feathers from www.feather.com.au were on sale when I bought them for $2.50 per 10cm. I bought 3.5m (ie 35 lots) totaling $87.50 which qualified for free shipping. The feathers then sat unopened for months while I searched for a suitable backing for them. Most DIY tutorials suggest you use cardboard to glue the feathers onto but I wanted something more sturdy and more authentic. While $87 in feathers in much cheaper than a real Juju hat, it's also quite a bit of money to outlay for craft so I was looking for something that I knew would stand the test of time. The week before Christmas I found what I was looking for at auction. I wasn't really paying attention as I was chatting to someone but I heard the auctioneer joking about a tribal African raffia shield and how it wouldn't really stand up to an attack. I managed to buy the shield for $6 or so and people were laughing about what I may do with it but I knew it would be a perfect base for my feathers. 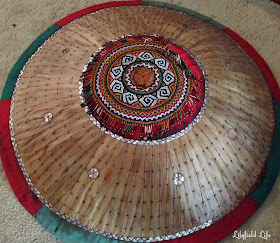 It was over 60cm diameter and very concave so once i'd unpicked all the colourful decoration off, I chopped it down to a more manageable 45cm diameter and it was a little flatter which was what I wanted.

You will need:
a suitable base
at least 3.5m of feather coque strung
A hot melt glue gun
loads of glue for your gun
scissors


With my trusty glue gun I got gluing. Make sure you glue the feathers the right way around. So that you can't see the binding string. 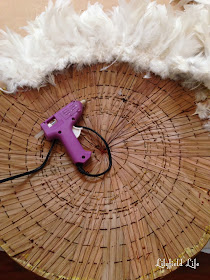 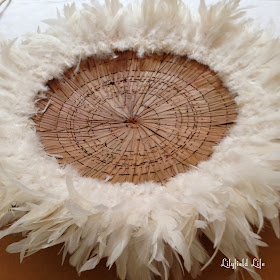 Once you have finished the first circle decide how close you want the second ring of feathers. I made mine quite overlapping with each ring about 3 cm smaller than the last. 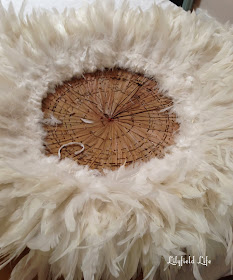 and so on
until you are finished the rings

You will probably have a pile of loose feathers so just pop a little glue on the end of each feather and glue them into the centre to fluff it out. 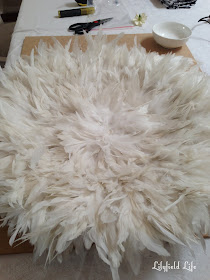 and the back view 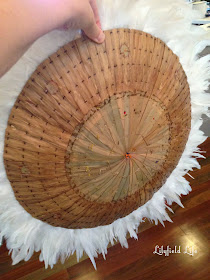 To hang I used twine and glue with a little square of cardboard to hold the twine in place. Very rudimentary but I was a bit over it by the end.  My trigger finger had a blister from the glue gun - I wish i was joking! 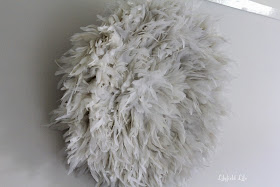 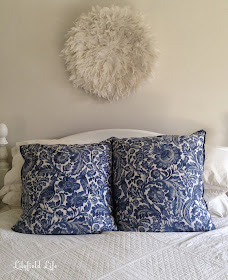 I love it and you'll probably be seeing a bit of it in my furniture styling.

Do you like Juju hats? got a real one? made one yourself?

Thanks for taking the time to comment! Sorry if you have trouble commenting, you can always email me at lilyfieldlife@bigpond.com